There are many on the Left who think Britain is a low-wage tax haven run for the benefit of the rich. The evidence, however, suggests this could not be further from the truth.

A new analysis by the TaxPayers’ Alliance shows the share of GDP extracted by the Government in tax will reach 34.2 per cent next financial year — the highest level for 52 years. Take away the spike in 1969-70 — when Harold Wilson hiked consumption taxes to fend off a sterling crisis — and it would be the highest since 1951, back when Clement Attlee was PM.

We all know the Government is up to its eyeballs in debt and that once this crisis is over Chancellor Rishi Sunak is going to need to find some way of balancing the books.

A new analysis by the TaxPayers’ Alliance shows the share of GDP extracted by the Government in tax will reach 34.2 per cent next financial year — the highest level for 52 years

But with Britain almost certainly sliding into a double-dip recession, now is not the time to be increasing taxes which are already high by historic standards.

Yet the Chancellor is reportedly considering doing just this when he presents his Budget on March 3.

Mr Sunak has already threatened to put up National Insurance rates for the self-employed. On top of that, predictably, there is a loud campaign on the part of Left-wing academics for the Government to introduce a wealth tax.

Hitting the so-called ‘rich’ may touch a chord in the current climate. But the genuinely rich always find ways to evade the tentacles of HMRC — it’s the middle-class professionals vital to Britain’s economy who would be stung.

In any case, higher taxes alone are not going to get us out of the very deep fiscal hole created by the Covid crisis. 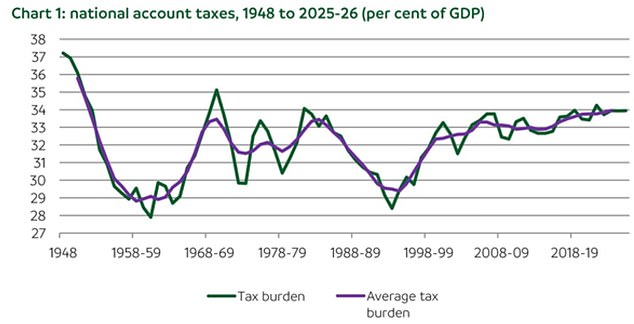 Take away the spike in 1969-70 — when Harold Wilson hiked consumption taxes to fend off a sterling crisis — and it would be the highest since 1951, back when Clement Attlee was PM

If the Government is going to close its record deficit — which the Office for Budget Responsibility says could reach £450 billion this year — it is going to require a big helping-hand from economic growth. That means not frightening away wealth-creating businesses and individuals.

Take corporation tax. It is true that at present Britain has a relatively attractive rate of 19 per cent — much lower, say, than Germany (30 per cent) or France (just reduced from 31 per cent to 28 per cent).

But in Ireland it is just 12.5 per cent. And it is not hard to explain why so many international companies have chosen to set up European operations there in recent decades — nor to understand why the Irish economy has boomed as a result.

When Boris Johnson became Prime Minister, he said he would cut corporation tax to 17 per cent. That is exactly the direction in which we should be heading — because we could actually end up raising more tax revenue.

The reason is that when you have lower corporation tax rates, companies have an incentive to do business on your shores, and the increased level of economic activity more than compensates for the reduction in tax levels.

When people move, it generates economic activity involving estate agents, solicitors, surveyors, local authority searches, removals, painters and decorators, furnishings, plants — the list goes on. And that all equates to jobs for people, and tax for the Government. Which is why Mr Sunak should reduce stamp duty for good.

As for capital gains tax, there is certainly a case at some point for aligning it with income tax rate. If we had a ‘flat tax’, where tax is levied at the same rate whether it is derived from earned income, unearned income or capital gains, it would make the tax system a lot simpler.

But if the Chancellor is going to align the two taxes, he should wait until he can afford to lower income tax. Merely jacking up capital gains tax would discourage the very entrepreneurs and wealth creators the country desperately needs to stimulate an economic recovery.

The answer, of course, is to leave any attempt at alignment until he can afford to lower rates of income tax.

Mr Sunak also would do well to bear in mind the experience of Chancellor Philip Hammond who burned his fingers over trying to hike National Insurance contributions for the self-employed.

If the economy is going to recover, the Government is going to need the army of self-employed — who, as Hammond found to his cost, are natural Conservative voters.

But there is one tax which the Chancellor should steer clear of above all others. A wealth tax has been an obsession of Left-wing economists, and of course Marxist politicians such as Labour’s former Shadow Chancellor, John McDonnell, for years. But in recent months it seems to have gone mainstream.

In December, the self-styled ‘Wealth Tax Commission’ —established in early 2020 by the London School of Economics and Warwick University to analyse proposals for such a report — recommended a one-off 5 per cent levy on all personal wealth over £500,000.

The levy would be based on a valuation of everything an individual owned — our homes, savings, pensions, and personal effects such as furniture, works of art and so on — and would be payable in five annual instalments. Such a tax, claim the academics, would raise £262 billion and go a long way to filling the hole in public finances.

Tempting though it might be to try to clear the nation’s debts in one fell swoop, wealth taxes have been dismal failures where they have been tried. 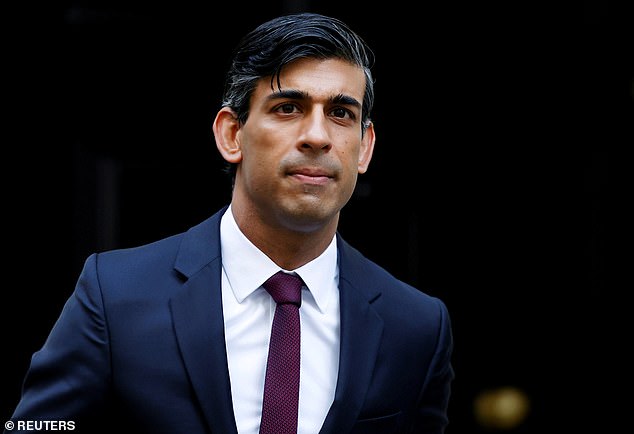 In 1990, 12 OECD countries had wealth taxes. By 2017 only four did: France, Norway, Spain and Switzerland. In 2018, President Emmanuel Macron abolished France’s wealth tax, too, replacing it with a levy based on property values.

Why? Wealth taxes tend to cost a country more than they raise in revenue, as wealth-creators flee, taking their assets with them. By the time it was abolished, France’s wealth tax accounted for just 0.5 per cent of the revenues of the French government.

According to tax consultant Eric Pinchet it raised the equivalent of £1.9 billion a year — at a cost of £92 billion a year in capital being withdrawn from the country.

A wealth tax would also be horrendously expensive to collect — it would require valuation officers to snoop around our homes, trying to guess what every painting and piece of furniture was worth.

Wealth taxes are especially harsh for people who are asset-rich but cash-poor. For example, you might own a modest family home now worth £500,000, have a pension fund worth another £500,000 but have few other assets.

That hardly makes you super rich, yet under the WTC proposals you would receive a bill from the taxman for £25,000 (ie five per cent of the value of your assets over £500,000). How could you possibly pay?

The Government can’t go on borrowing as it has been doing. It is already spending £44 billion a year on debt interest — nearly as much as it spends on education. And that is with interest rates at a record low. It wouldn’t take a huge rise to make the burden of debt unbearable.

But the Chancellor is not going to balance the books by trying to pick our pockets at the moment.

He has to let the economy recover, wages and incomes to boom once more — and then he will be in a position to take a fair share of the spoils.