Investors are bracing for a reversal of a few of those positive trends over the next few quarters as streaming demand settles back down to a more normal level. Netflix is predicting an unusually weak fiscal fourth quarter, for example. Yet CEO Reed Hastings and his team might still have plenty of good news for shareholders when they announce earnings results on January 19.

Let’s look at the highlights.

Management warned back in October that part of the growth surge Netflix enjoyed through the first nine months of the year involved pulling forward subscriber gains from future quarters. After having added 26 million subscribers in the first six months, it added just 2.2 million in Q3 (compared to 6.8 million additions a year earlier). Netflix is expected to have added 6 million paying users in the fourth quarter to mark another rare slowdown from the prior year’s 8.8 million additions.

The bigger picture is decidedly bright, though. Even if it just hits its projection, Netflix will have gained 34 million new users in 2020 to blow past its previous annual record of 29 million, set in 2018. It should end the year at just over 200 million paid memberships.

We’ll likely get good news on the engagement front, too, given that Netflix already said it enjoyed record viewership over the holidays. New exclusive content like Cobra Kai, The Queen’s Gambit, and Bridgerton all seem like major hits. These wins should support low cancellation rates for the service and higher average watching time, which form the basis for Netflix’s regular increases to its monthly fee.

Investors got a rare treat in seeing Netflix’s cash flow trend shoot into positive territory last year. That was mostly a quirk of the pandemic, though, which forced a pause on almost all content production spending. Still, the surging cash was a hopeful sign of the business’s long-run potential. 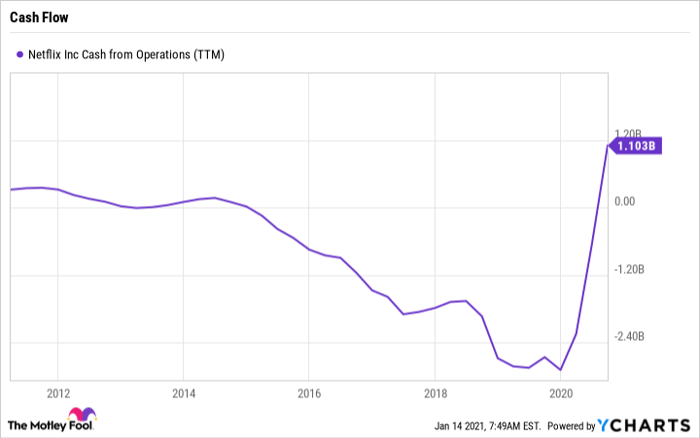 Cash flow is predicted to fall back into negative territory in Q4 as production ramps back up. But Netflix is on pace to potentially reach the break-even point in fiscal 2021 before generating ample cash annually from that point forward.

Hastings in late October said that the short-term outlook was weak even though the business is as strong as it has ever been. Customer additions should decline in the first half of 2021, executives have predicted, before returning to a more normal pace that reflects the many years of growth ahead in the streaming video industry.

There’s plenty of uncertainty about what that pace will look like given all the changes to consumer entertainment demand in recent months. Yet Netflix is delivering increasing value to users, as reflected in growth in average viewing hours.

Success there, through better content and an improved service, is the company’s surest path toward maintaining its dominant streaming lead. Investors should focus on that positive long-term outlook on Tuesday.

10 stocks we like better than Netflix
When investing geniuses David and Tom Gardner have a stock tip, it can pay to listen. After all, the newsletter they have run for over a decade, Motley Fool Stock Advisor, has tripled the market.*

David and Tom just revealed what they believe are the ten best stocks for investors to buy right now… and Netflix wasn’t one of them! That’s right — they think these 10 stocks are even better buys.