Until today, the entire Dimensity series was fabbed on a 7nm process, but that just changed – the Dimensity 1200 and 1100 are MediaTek’s first 6nm chipsets. And they are the first to use the Cortex-A78 core. The two are based on the same raw hardware, but target slightly different bins.

The Dimensity 1200 is the premium offering. Its CPU has a 1+3+4 configuration with a A78 core is running at 3.0GHz, plus three more A78 cores at 2.6GHz and the usual quartet of power-efficient A55 cores running at 2.0GHz.

For comparison, the Dimensity 1000+ used an older A77 core that topped out at 2.6GHz. These numbers line up just right with ARM’s official estimates – a 3.0GHz A78 is 20% faster than a 2.6GHz A77. That’s for single-threaded performance, of course, as only one core in each chipset reaches those frequencies. Overall CPU performance is up by 22% and power efficiency is up 25% compared to previous generations. 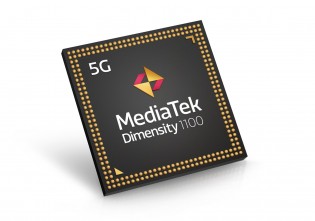 As for the Dimensity 1100, it doesn’t have a prime core as such – all four of its Cortex-A78 cores run at 2.6GHz. However, even without higher clock speeds, the 1100 has an architectural advantage so it should have an edge over the Dimensity 1000+ in both single and multi-core performance. And then there’s the ancillary hardware.

Both chipsets use the same GPU. In fact, they are reusing the 1000-series GPU, the Mali-G77 with 9 cores for both chips. On the plus side, AV1 video now has hardware acceleration.

The Dimensity 1200 can treat the eye to 168 Hz displays and its 5-core ISP can handle camera sensors up to 200 MP. Also, with staggered HDR support for 4K videos (three exposures are merged into a single frame), the dynamic range is increased by 40%.

The 1100 chip is no slouch either, with support for 144 Hz displays and camera sensors up to 108 MP. Both phones are 20% faster in processing Night Shot and have a dedicated Night Mode for panoramas.

Several companies are champing at the bit to use MediaTek’s new Dimensity 1200 and 1100 chips – including Realme, Xiaomi, Vivo and Oppo. They will release new phones around the end of March, beginning of April.