The Bank of Japan on Thursday maintained its assessments on five of the nine regions amid a resurgence of coronavirus cases as Governor Haruhiko Kuroda expects the pace of recovery to be modest.

In its quarterly Sakura report, the assessment on Hokkaido in northern Japan was downgraded due to a slowing recovery while the BOJ raised its view on the remaining three regions, Hokuriku, Shikoku and Kyushu-Okinawa.

Bank of Japan Governor Haruhiko Kuroda (2nd from L in front row) attends a teleconference with branch managers on Jan. 14, 2021, at the central bank’s head office in Tokyo. (Kyodo) ==Kyodo

The economy was in a “severe” situation in many regions due to the pandemic, but signs of a pickup have emerged, the BOJ said.

The report came amid reignited fears of a double-dip recession as Prime Minister Yoshihide Suga declared a new state of emergency over the virus, targeting 11 of the country’s 47 prefectures. Japan saw a resurgence of the virus toward the end of 2020 and is struggling to stem the rise.

Kuroda said earlier in the day that the BOJ will take additional easing steps if necessary to support the world’s third-largest economy.

The five regions with no assessment change include Kanto-Koshinetsu, which includes Tokyo, the worst-hit among all prefectures, as well as Kinki in western Japan covering Osaka.

The Sakura report pointed to sluggish consumption. Economists have warned that the second state of emergency will hurt private consumption, accounting for more than half of Japan’s gross domestic product. 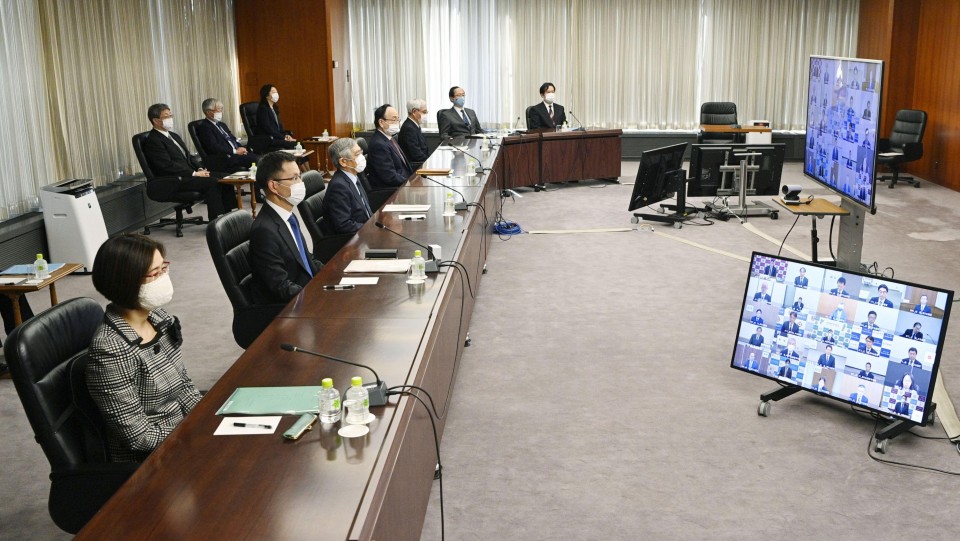 Bank of Japan Governor Haruhiko Kuroda (3rd from L in front row) attends a teleconference with branch managers on Jan. 14, 2021, at the central bank’s head office in Tokyo. (Kyodo) ==Kyodo

The services sector, in particular, has been dealt a severe blow amid the pandemic as people stay at home and refrain from dining out. Under the latest emergency measure, restaurants and bars are asked to close at 8 p.m.

“We are normally fully booked during the New Year holidays, but it was disastrous (this year) that the room occupancy rate was below 50 percent due to the resurgence of infections and a subsequent suspension of the ‘Go To Travel’ campaign,” an official in the hotel industry said.

“The declaration of a fresh state of emergency targeting the metropolitan area is leading to more cancellations,” the official was quoted by the BOJ in the report as saying.

All nine regions said production was either picking up or increasing, helped by a recovery in auto and semiconductor demand. But all areas cited weakness in employment and income conditions.

The latest state of emergency, covering more than half of the Japanese economy, will be effective until Feb. 7.

The country previously issued an emergency declaration over the virus in the spring of 2020. That led to a sharp economic contraction as consumption and business activity took a hit.

“The pace (of economic recovery) will likely be rather moderate while there remains a sense of alert against infections,” Kuroda said during a virtual meeting of the BOJ’s regional branch managers.

The pandemic has put the bank’s 2 percent inflation goal further out of reach, raising the likelihood that its ultraloose monetary policy will continue for an extended period.

Kuroda said the consumer price index will likely fall “for the time being,” due to the impact of the pandemic, falling crude oil prices and the government’s “Go To” subsidy program to spur domestic travel demand.

The Sakura report, named after its cherry blossom-colored cover, is released every three months following a meeting of regional branch managers. The BOJ is scheduled to hold a two-day policy-setting meeting next week.

FOCUS: Japan prepares for digital currency, in line with China and others

The Gluten Spectrum–Why does this Grain Protein Make So Many People So Sick?